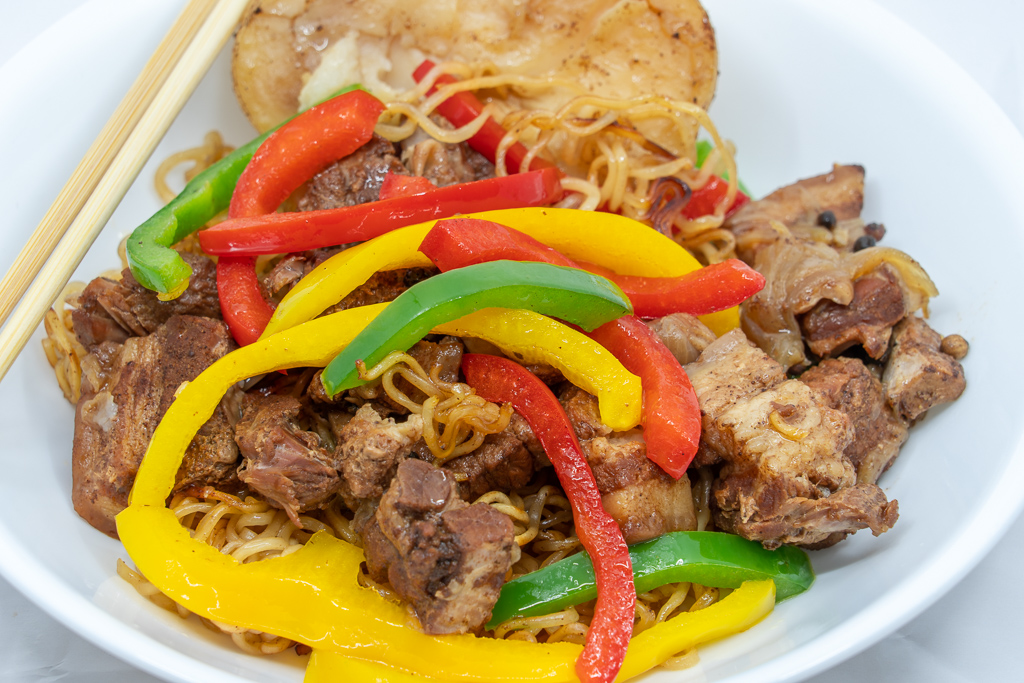 Earlier in the week, I made this dish and posted the photo in the Facebook group, “Cooking meals for one”. One of the members, viz., Merryn, suggested I write a post on Yummy Lummy.

I am happy to do this; it makes me giggle though that I’ll not be able to share the post on Facebook because the good people of Facebook have banned Yummy Lummy for breaching its community standards. If you want to read this recipe on Yummy Lummy, click here.

I’ve tried to appeal this decision but to no avail. I don’t know what component of the Facebook community standards I breached. Maybe the good people of Facebook don’t like my take on fusion cuisine. Perhaps they didn’t like the videos I used to make and post.

Anyway, there is nothing to be gained by crying over spilled milk. Not to worry, it is what it is, and the way I see it, it’s the good people of Facebook who are missing out!

I used a pressure cooker to cook the pork belly. You could also use a slow cooker.

What’s with the bible verses and the mention of prayers?

I realise I’ve lost a few subscribers because I’ve outed myself (this seems to be the terminology used these days to reveal personal change or orientation or identity). At the beginning of the COVID-19 pandemic, a friend shepherded me back to faith after nearly two decades of life in the wilderness.

Yummy Lummy is still a food blog, but you’ll read about the real me.

If the bible verses, mention of prayer, or the books I’ve been reading cause you to unsubscribe, I don’t mind.

I'm a Christian. I'm also a medical practitioner, specialist pathologist in microbiology, and Member of the Order of Australia (Bali Bombings investiture, 2003). View all posts by Gary

This site uses Akismet to reduce spam. Learn how your comment data is processed.

Recent Posts: What I think, watch, listen to, and eat each week

Going to the doctor to be tested

Weekend sport is coming back

Kale sprouts are back

Another trip around the sun